What You Can Learn from Your Dog about Mindfulness

Since I've lived in apartments for the entire 3 years I've had my dog, Trooper, Zach and I have always had to walk him with a leash. Our current apartment has a nice bark park, which helps him get some energy out, but for the most part, he's on a leash.

It's easy to get bored while walking your dog on a leash. Sometimes, I pull my phone out to take a quick peek at an app (this is a whole separate issue, really 😜) while he's staring off into space or letting out little huffs at other dogs/humans.

After a while of him standing still, I think (rather impatiently), "What are you looking at? Can you just do your business already?". Here's the thing: he has no choice but to be present in every single moment. Their brains aren't wired like ours to think about the future. 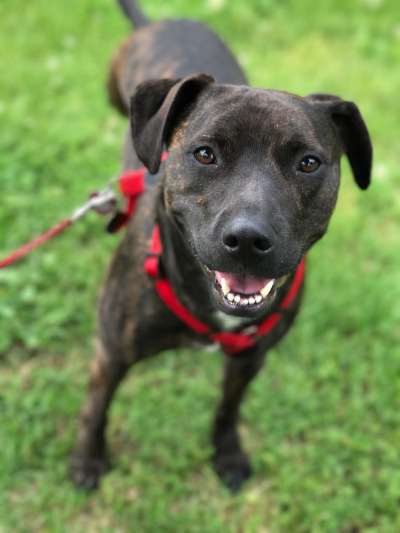 Bonus! Here's another picture of Trooper. :)

Trooper can really only think about what's right in front of him. Who knows if nature intended this, but I assume that animals are like this for a reason. Wild animals don't have time to worry about things that aren't even happening—they're too busy trying to survive predators and starvation.

Most of us don't really have to do that, at least not to the same degree. Trooper doesn't have to do that either since we take care of him, but what's the coolest side effect about him still having a limited perception? He's an extremely happy pup. He's content watching birds, sniffing flowers and poles, and sunbathing.

So, what can we learn about mindfulness from our dogs? You'll be a lot happier if you practice it. Try not to worry too much about things until they're actually a problem. Try to use your phone a little less. Look up. Look around. See the beauty in your surroundings.